Best places to dive with Sharks 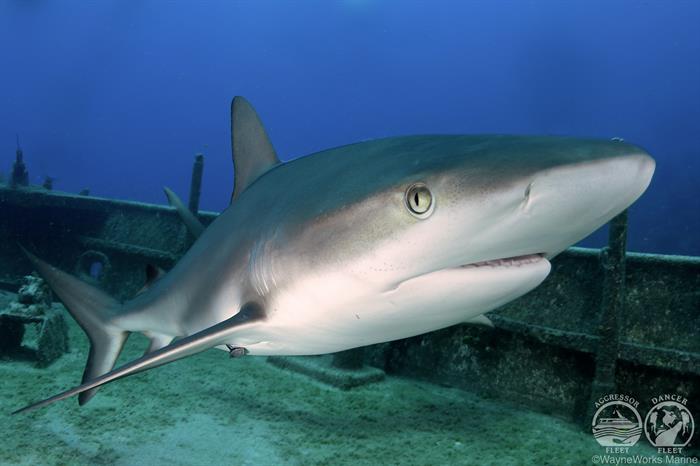 Sharks are the apex-marine predator, top of the food chain. Scientists believe there are around 400 different species the smallest is the Dwarf Lantern Shark, less than seven inches long, the largest being the gentle Whale Shark which can reach lengths up to 13 meters/42 ft. Unfortunately, many shark species are endangered due to overfishing and destruction of habitat.

Sharks are highly intelligent creatures, and a healthy population of different shark species is a sign of a thriving ecosystem. Certain movies have given sharks a bad reputation and the reality is the experience of being underwater with them is mind-blowing and will leave you feeling humbled and indignant that people are scared of these beautiful creatures. However, as with any wild animal you must respect them and their environment. Fortunately, there are certain areas of the globe which still support an abundance of these graceful fish across the globe, countries such as Mexico, Maldives, Egypt and many more which have dive sites that will suit all shark fanatics.

Best Places to dive with Sharks

Below is a roundup of some of the best places in the world to dive with sharks.

Guadalupe: The West Coast of Mexico boasts a host of marine life. One area famous for its large shark encounters is Guadalupe Island. Situated 241 kilometres of the Baja California coastline it is one of the best places in the world in which to encounter Great White Sharks underwater. Natural interaction is key, double-decker cages are lowered down to the shark's level so that minimal amounts of chum are used. The visibility is generally better than other areas in the world in which Great Whites frequent which makes for a spectacular dive. Whilst diving with these stunning creatures you realise how intelligent and calm they are, completely different from the stereotype that the majority of the world associates with the name Great White. Also, read our tips on cage diving with sharks.

Socorro: Socorro Island, is volcanic and which is situated a little further to the South it is home to a huge variety of shark species. The only way in which to access the island and dive sites is via a Liveaboard, the season from November to May. One of the main dive sites is Roca Partida, which is a magnet for a number of pelagic species. The 40 meters drop off walls and deep waters attract shark species such as Oceanic Whitetips, Silvertips, Scalloped Hammerheads, Galapagos sharks, Tiger sharks, Silkies and Whale sharks.

Rasdhoo Atoll: The Hammerhead shark is one of the most prehistoric-looking underwater species. It has an iconic head shape with extremely wide-set eyes, which has evolved as an extremely effective hunting tool. The Hammerhead shark uses its unique head shape to help it catch its favourite food the stingray which buries itself in the sand seafloor. The deep waters of the Rasdhoo Atoll attract huge numbers of Schooling Hammerhead Sharks, a surreal experience to dive amongst hundreds of these graceful creatures which can be found at Hammerhead point. The Rasdhoo Atoll is located North East of the popular Ari Atoll and due to its remote location is only accessible by liveaboard.

Elphinstone | Daedalus | St Johns: These three islands are located off the Egyptian Red Sea coast and usually visited during a liveaboard trip departing from Marsa Alam. Each island offers its own unique shark experience. Elphinstone and Daedalus are drift dives with steep walls. These islands are prime shark habitats, yet the diving can be tricky and you have to have a decent level of diving to really enjoy these dives. The best season in which you may encounter the impressive Oceanic Whitetip is between October and December, alongside which species such as Hammerheads, Tiger Sharks and Silvertips are sighted frequently and if you are super lucky a rare Thresher sharks may appear from the deep. The third site is that of St Johns, a collection of reefs which are extremely healthy, supporting giant Gorgonians and Black Corals. On the west side it is highly likely you will find Hammerheads, Silvertips and Grey Reef sharks, the diving here is suitable for all levels.

Tiger Beach: As the name suggests if Tiger sharks are high up on your bucket list, then diving of Tiger Beach at an area known as shark pinnacle is highly recommended, you are likely to encounter these magnificent fish, with their distinctive tiger stripes which can grow up to 18ft. Aptly named shark pinnacle you are likely to see a variety of sharks alongside the Tiger, including Lemon sharks, Bull shark, Great Hammerhead, Duskys, Silkies and reef sharks. Whilst kneeling on the white sand allowing them to approach you is adrenalin pumping experience one which you will never forget and perfect for avid photographers. 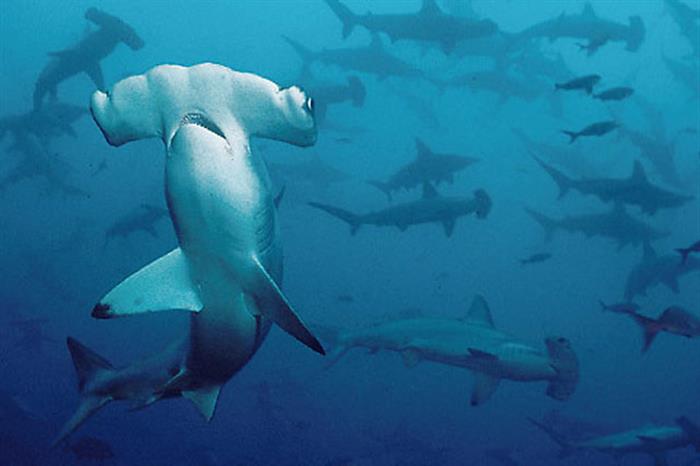 These Islands form what is known as the Hammerhead Triangle, which is drawn between Cocos Island, Galapagos Islands and Malpelo Island.

Cocos Island (Costa Rica)
Cocos Island is recognised as one of the top spots in the world for diving with sharks. They are extremely remote being located 550km from the coast of Costa Rica and meaning 36 hours of sailing lie between you and the schools of hundreds of hammerheads, including the highly endangered Squat Head Hammerhead. Well worth the journey time for those seeking a very special shark experience. Hammerheads by nature are not at all aggressive yet always be respectful when entering their natural environment.

Malpelo Island (Colombia)
Not as well known as Cocos Island, but every bit as good for shark sightings in large numbers. Malpelo Island is an amazing place to see large schools of Hammerhead sharks and Silky's. Numbers of up to 300 sharks have been recorded in this area, making it a top spot for divers to see sharks. Belonging to Colombia but also accessed from nearby Panama these islands are located approximately 500km West of the mainland.

Malapascua's, Monad Shoal: Monad Shoal is an underwater island, 20 meters deep which has a 200meter drop-off. The Thresher shark is a pelagic shark and is critically endangered, which means there are few areas in the world in which you have a high chance of finding them. The Monad Shoal is an exception, it acts as a cleaning station, early in the morning the sharks come to the shoal to be cleaned, which is when we the dives head out perfect for photographic opportunities. These sharks are extremely shy so it is advised to be calm and quiet underwater, also to remain in the area for a few days in order to increases your chances of encountering them.

As with all wild animals, sharks should never be underestimated, ensure you listen to your local dive guide in order to get the most out of the experience. Our oceans are in a fragile state, if we all work together to protect what we love, hopefully, these hotspots and healthy underwater ecosystems will continue supporting an abundance of shark species for many generations to come.

Above are some of the main diving areas with the best chance to see some shark action, but other areas where sharks are often seen are;