The MSY WAOW, a popular and beautiful Indonesian liveaboard vessel, will no longer be operating as she sank during a storm in Biak Harbour on 31st January 2018. There was no loss of life or physical injury.

It is reported there was a fire in the engine room of WAOW during the night of 31st January 2018, which the crew, cruise director and captain were not able to stop despite their best efforts. Thankfully there were no customers on board, as the vessel was between two trips, and no injuries occurred. A full investigation will be carried out in due course. 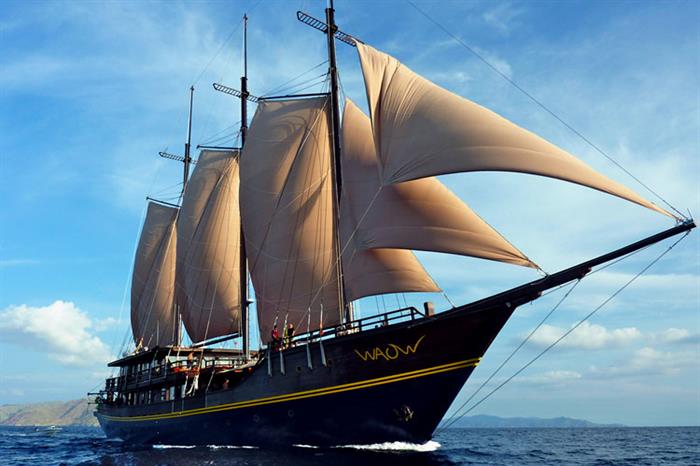 The WAOW team have released a heartfelt statement following the incident, expressing their sadness and gratitude to the crew and customers who ‘shared the WAOW adventure’ with them. Their positive approach in the face of such a devastating event was clearly evident in the final paragraph of the statement:

‘Finally, THANK YOU to all of you who have allowed us to realize and live our dream. Like diamonds the WAOW is, at least in our memory, eternal. But life goes on, with new opportunities for each of us: seize them and enjoy them.’

The WAOW, so named from peoples’ exclamation upon seeing the vessel plans, was a three-masted sailing vessel. Her name came to mean Water Adventure Ocean Wide and she was constructed entirely from wood, with steel masts. She was built by a team of traditional master carpenters with 400 years of construction history and was created with Ironwood, a particularly rare type of wood. It took four years to build her and her design was inspired by traditional Indonesian cargo boats, the Phinisi, and straight-deck Schooner style vessels.

Designed predominantly for scuba diving, charter operations throughout Indonesia began in April 2012. She was a very popular vessel with luxurious facilities, and will no doubt be missed by all.

We wish the crew and full WAOW team all the best as they move forwards into the next chapter.