Diving with Sharks in the Red Sea

Every year, thousands of scuba divers visit Egypt hoping to enjoy the world-famous shipwrecks and marine life that the Red Sea offers. With its clear waters, vibrant coral reefs, and diverse marine life, the Red Sea is one of the world's premier diving destinations. And what could be more thrilling than scuba diving with sharks? Whether you're a beginner or an experienced diver, there's something for everyone in this underwater paradise.

But for some, the main attraction is not the coral reefs or colourful fish – it's the sharks. The Red Sea is home to several shark species, including hammerheads, thresher sharks, and whale sharks. With its clear waters and abundance of marine life, the Red Sea is the perfect place to see these magnificent creatures in their natural environment. But, no matter the species, these animals should always be treated with respect and caution, as they are powerful predators. 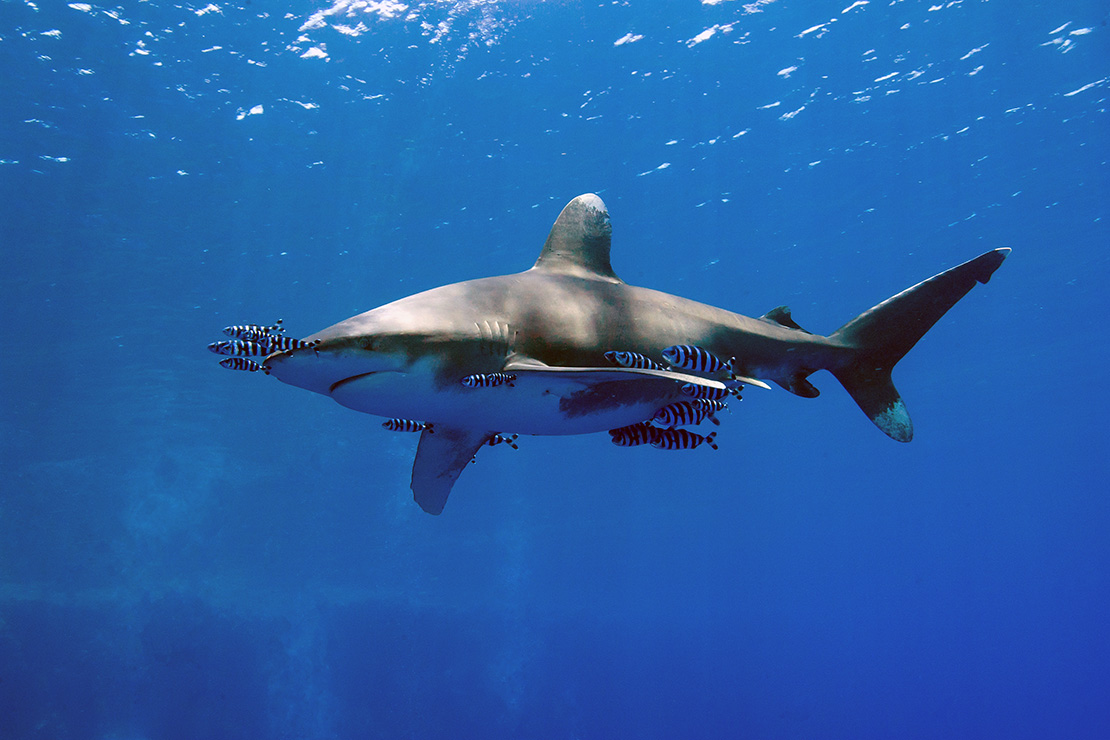 The most common shark in the Red Sea, these solitary animals can grow up to 4 meters in length. Sleek and powerful, they are opportunistic predators, easily recognisable by the white tips on their fins and the wide pectoral fins, and an entourage of pilot fish usually accompanies them. Divers most commonly encounter it from May to November. It is not shy about approaching divers to check things out. 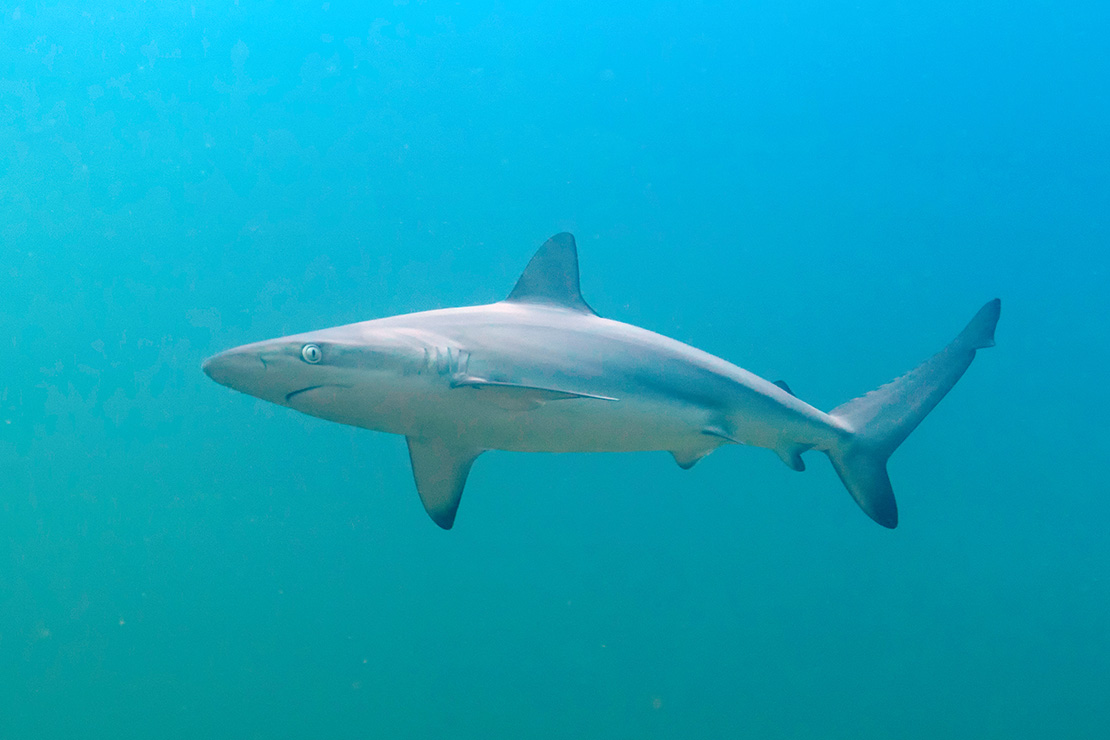 The Dusky Shark is the next most common shark in the Red Sea. They are torpedo-shaped and have a long, slender nose with a pointed snout. This species is considered dangerous to people, and although attacks on humans are uncommon, they do occur. You can see them in the Red Sea from December through May. 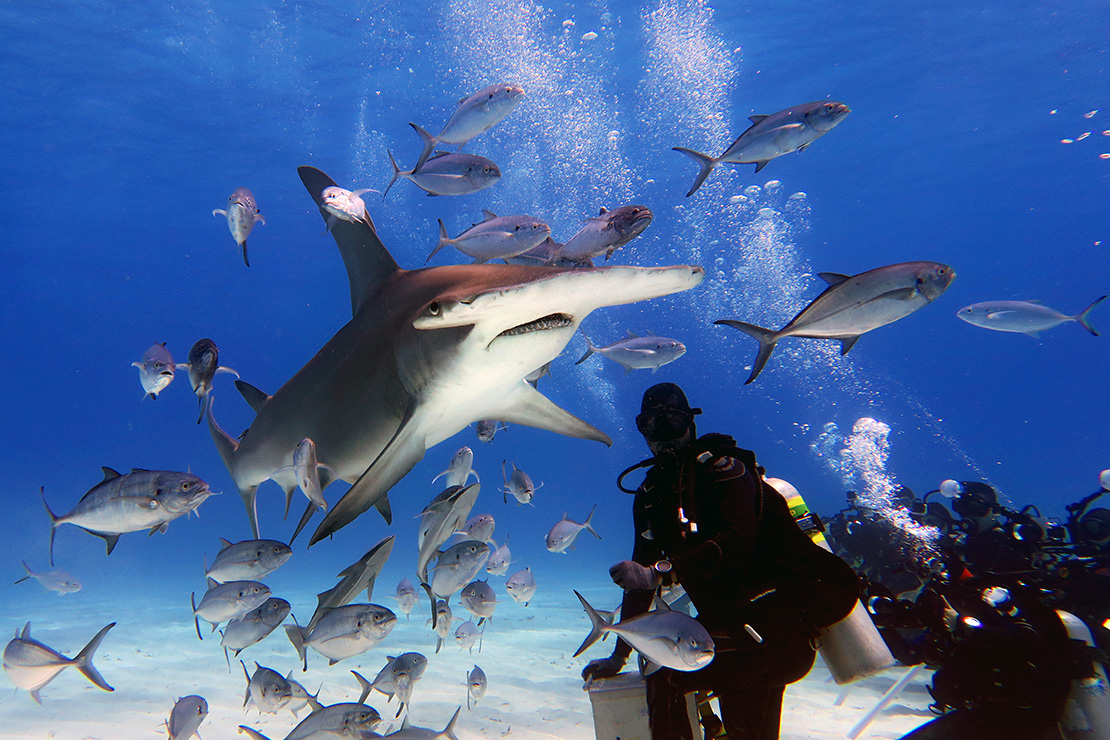 The Hammerhead is a timid, solitary shark, easily the most recognisable with its hammer-shaped head and long dorsal fin. They are found in warm temperate and tropical waters worldwide but are most common in the Red Sea. Sightings are most common in Sharm El Sheikh when the water is warm, from June to November. They are can also be seen in Tiran and Ras Mohammed. 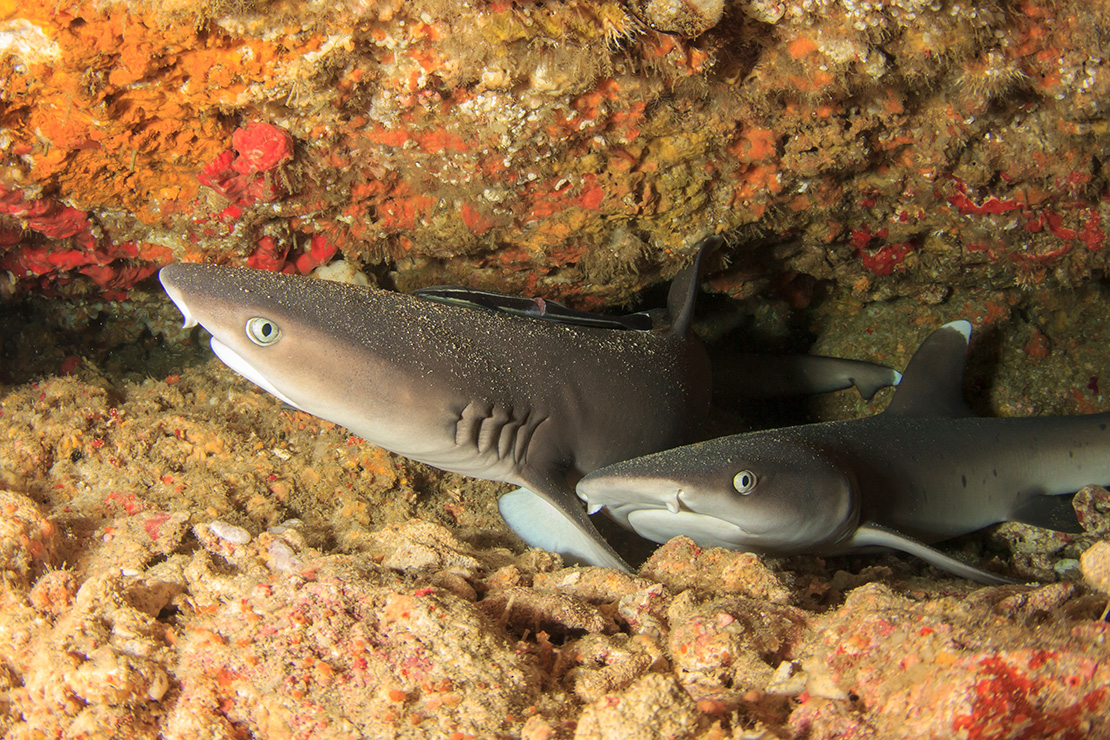 A typical shark in the Red Sea is the White Tip Reef Shark. This species is most active at nighttime and is one of the few often found resting on the bottom of the sea or gathered inside caves. You can find them in popular diving areas like Ras Mohammed, Tiran, and others throughout the year. 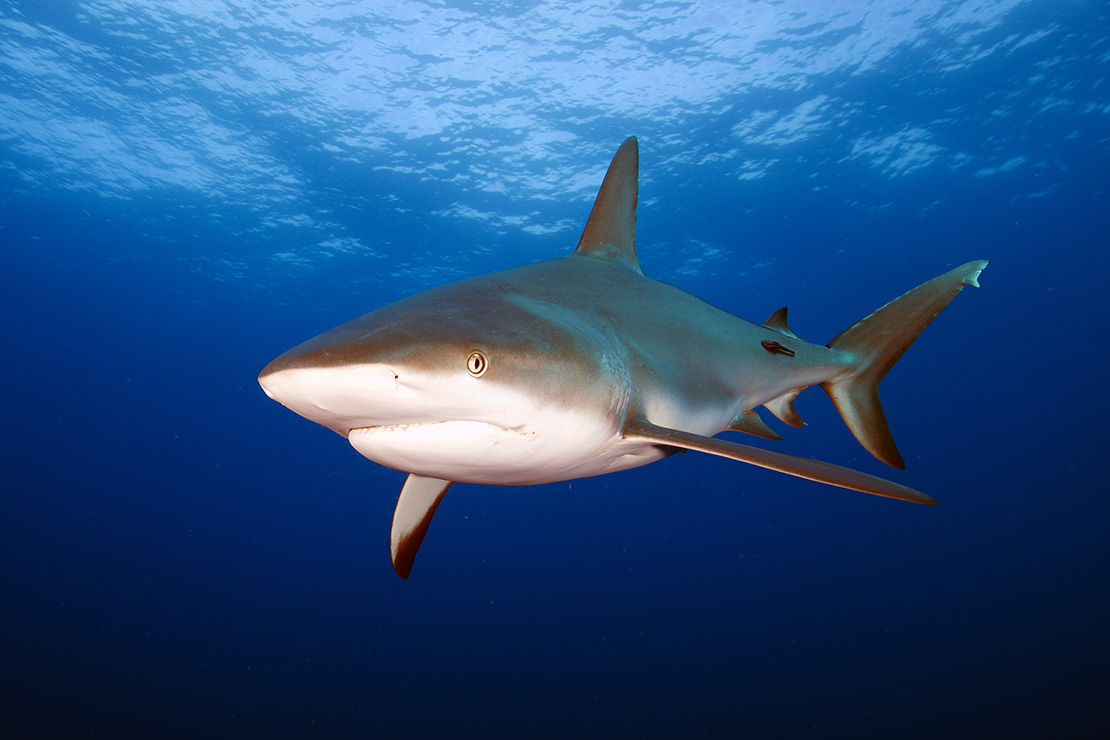 The Silky Shark is a beautiful fish that can grow up to 1.8 meters/6 feet in length. It has a characteristic black band around its pectoral fins and an elegant body shape. They are usually found near the surface, and one can often see them leaping out of the water in pursuit of prey. They can be spotted in the Red Sea from November through January. 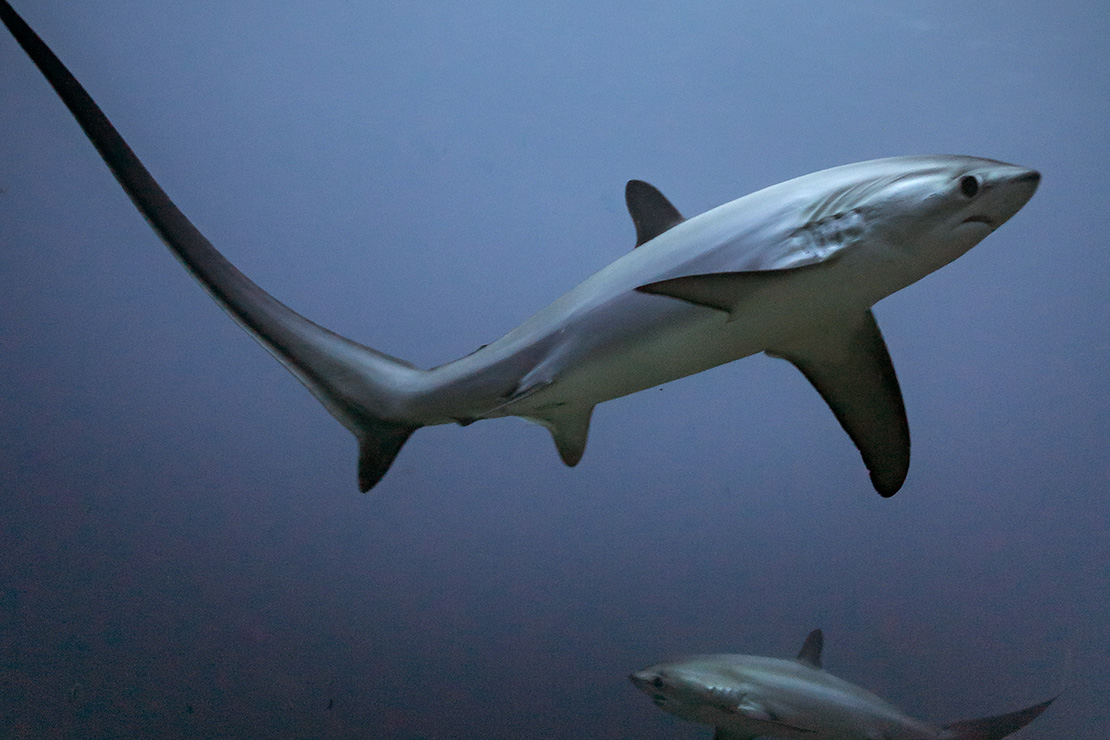 Another species with a very distinct look, albeit a rare sight, is the Thresher Shark - a shiny, black-eyed predator that hunts by stunning prey with a whip of its tail, which is twice as long as its body. These beautiful animals don't typically hang around divers, but they are more common in the Summer around Tiran and Ras Mohammed. 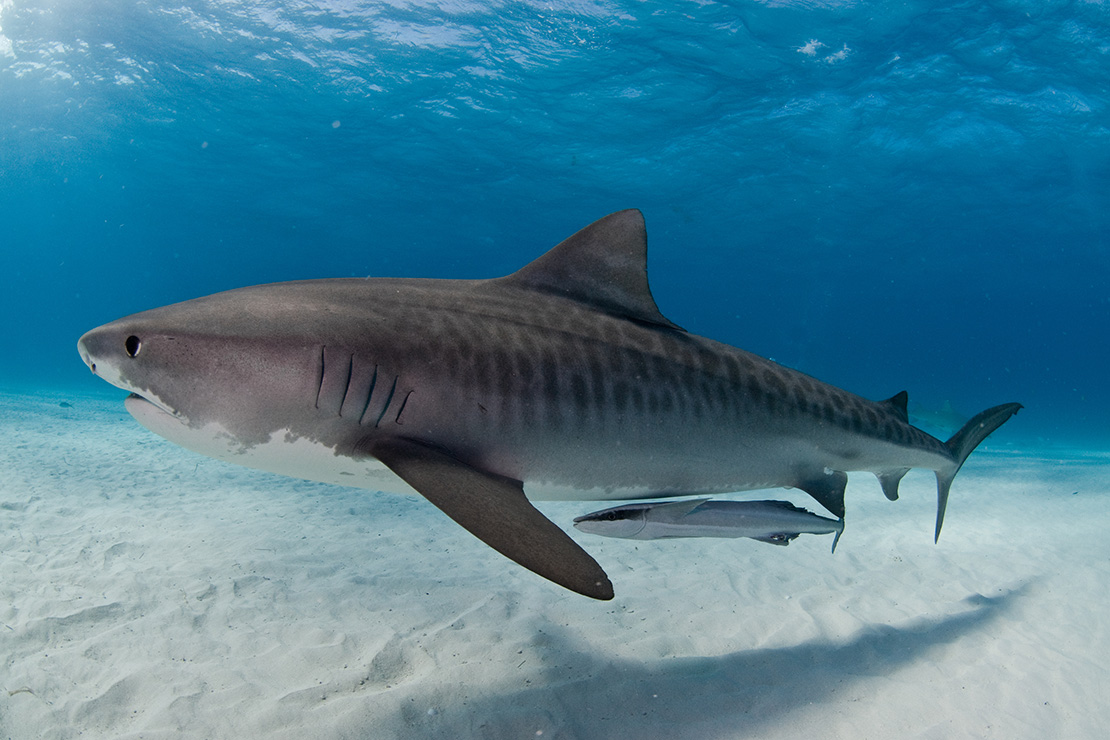 Keeping with the "lookers" theme, we cannot forget the Tiger Shark, with its unmistakable vertical stripes along its 5-meter/16 feet-long body. This scavenger will eat pretty much anything but has a preference for turtles. Tiger shark sightings are more common in the Summer months, corresponding with the Green and Hawksbill turtle mating and nesting season. There are many sights where one can encounter these creatures: Jackson Reef, Woodhouse, Thomas Reef, and even Ras Mohammed. 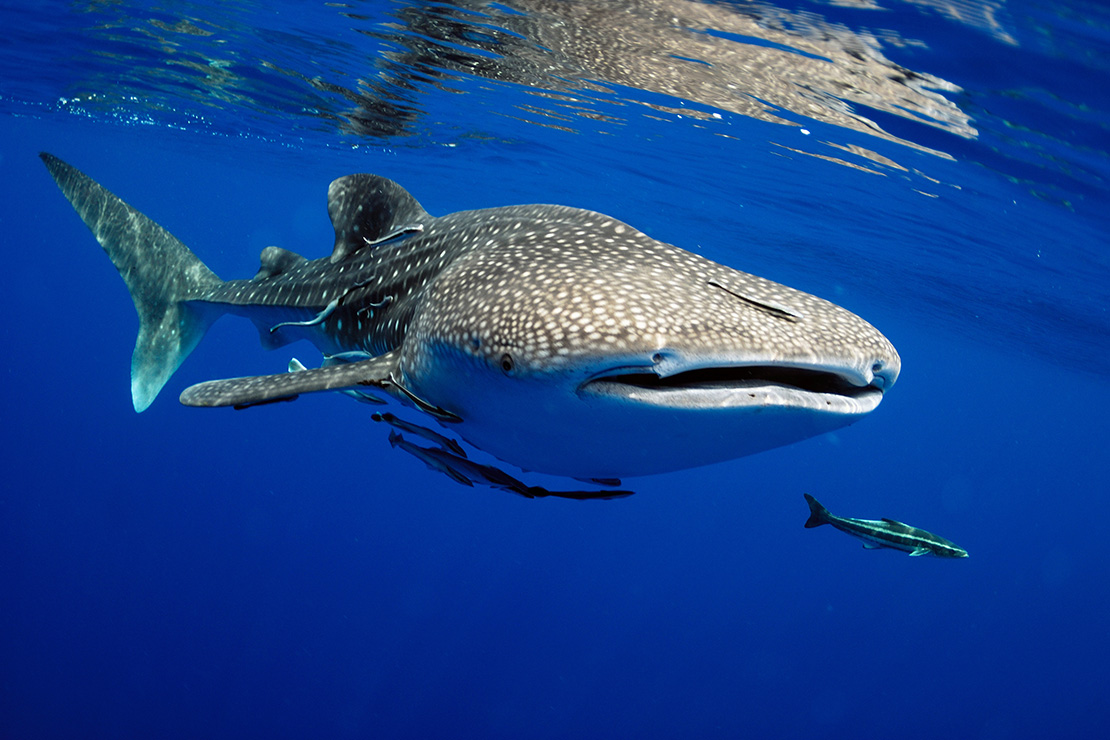 We saved the best for last: every scuba diver's dream, the massive, unmistakable Whale Shark. Growing up to 12 meters in length and weighing over 20 tons, these plankton-eating gentle giants are most commonly sighted during the Spring and early Summer months. The best sightings are usually around Ras Mohammed National Park and the Straits of Tiran.

While we've only named a few of the more popular sharks in the Red Sea, there are many more species to watch. So, if you're looking for an adrenaline-pumping scuba diving experience, the Red Sea is a must.

The best way to cover the most areas possible is diving from a liveaboard. This way, divers can explore the remote sites inaccessible from shore. The Red Sea has something for everyone, with various dive sites to suit all experience levels, from beginner-friendly reefs to advanced wrecks and walls. And of course, there are plenty of opportunities to see sharks.

Grab your diving gear and head down to the Red Sea for a shark diving experience you'll never forget. Book your Red Sea Liveaboard trip today and get ready for an unforgettable diving adventure in the Red Sea. Don't forget to bring a camera.